Here at Montracon, we are always looking at new ways to increase driver safety. EN 12642-XL plays a huge role in driver safety and as one of the market-leading trailer manufacturers, we have the approval to build EX12642-XL GRP Box Vans, Postless & Posted Curtainsiders, and Flats. So what is EN12642-XL? 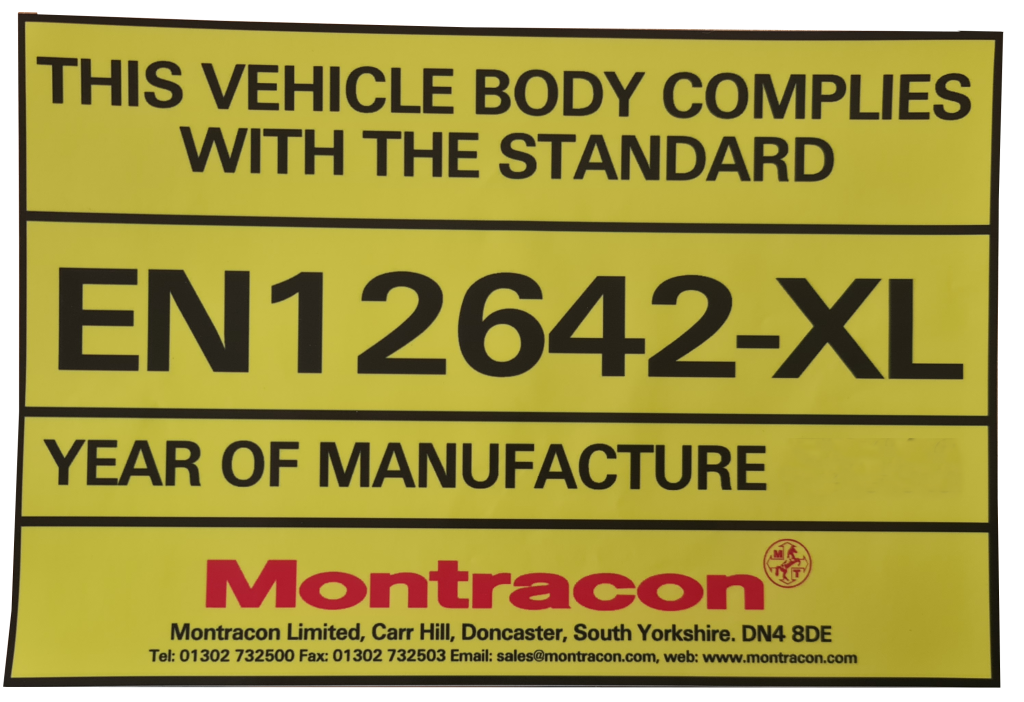 What is EN 12642-XL?
EN 12642-XL is a European load containment standard for the complete body structure of commercial vehicles and trailers. The standard applies to body structures (either trailers or rigid bodies) with a GVW over 3500kg. This standard sets out basic minimum requirements for the side walls (and or curtains), front and rear walls and must be tested by an accredited body such as German TUV or the UK VCA.

The rating can be issued (and must be marked clearly on the vehicle) when the test criteria for all areas have been met. For curtainsiders, the rating is not limited to the curtains themselves and must be applied to both curtains and supporting bodywork.

Test Methodology:
XL testing can be determined using one of two types of test: static and dynamic. 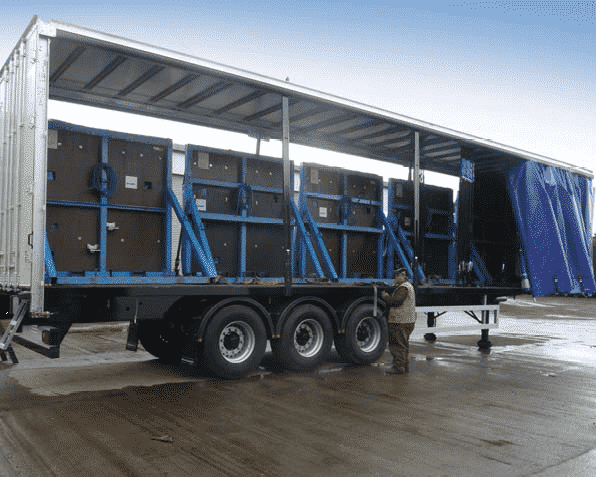 The test encompasses an immovable flat surface, placed 50mm to the inside of the body. An inflatable bag is then placed between the flat surface and the body is inflated so that it exerts the correct test force over the specified test area. The specified test force must be applied for at least 5 minutes and after the test is finished the body structure should not show either permanent deformation or changes which would impair its intended use.

1. Under 100% force, there must not be any temporary deformation exceeding 300mm.

2. Under 100% force, there must be no permanent deformation exceeding 20mm.

3. Under 85% force, there must be no permanent deformation.

The “Force” is defined as a constant force, applied at right angles to the surface it is being applied to.

With a Dynamic test the trailer is loaded. The cargo must be evenly distributed the full length and a minimum of ½ the overall height of the trailer. Once loaded the trailer is dr 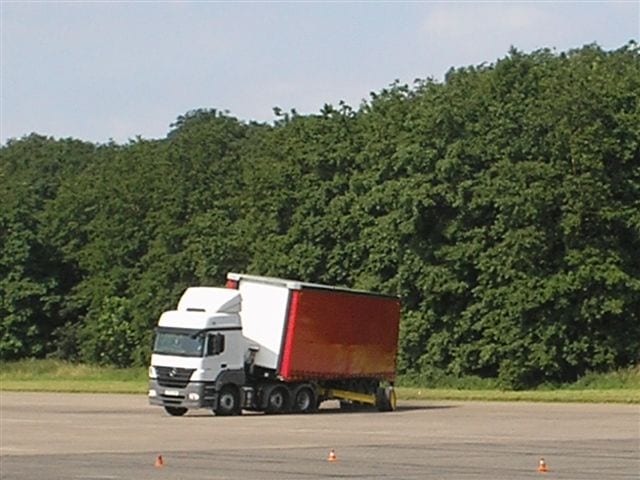 iven around a test track at a constant speed incorporating numerous manoeuvres within each lap of the track. The trailer must complete a minimum of 3 consecutive laps of the test track. 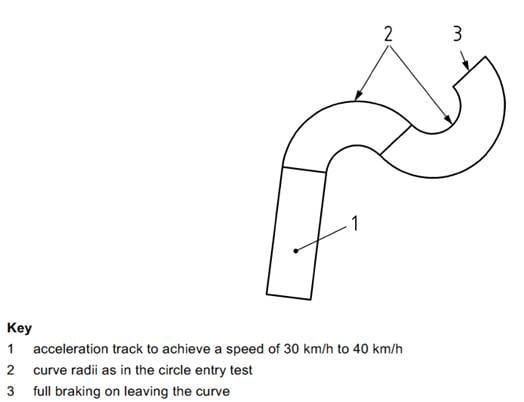 Examiners should be able to identify an XL rated trailer by the decals attached to the vehicle (example shown below). 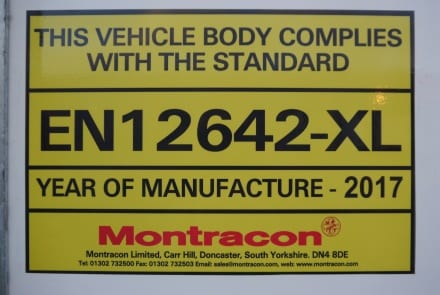 The decals must be affixed to the bodywork on all four sides, bulkhead, rear and both sides of the vehicle

We are aware of trailers which have very similar stickers with wording along the lines of ‘These curtains have been manufactured to suit bodywork with the standard EN 12461 L’. 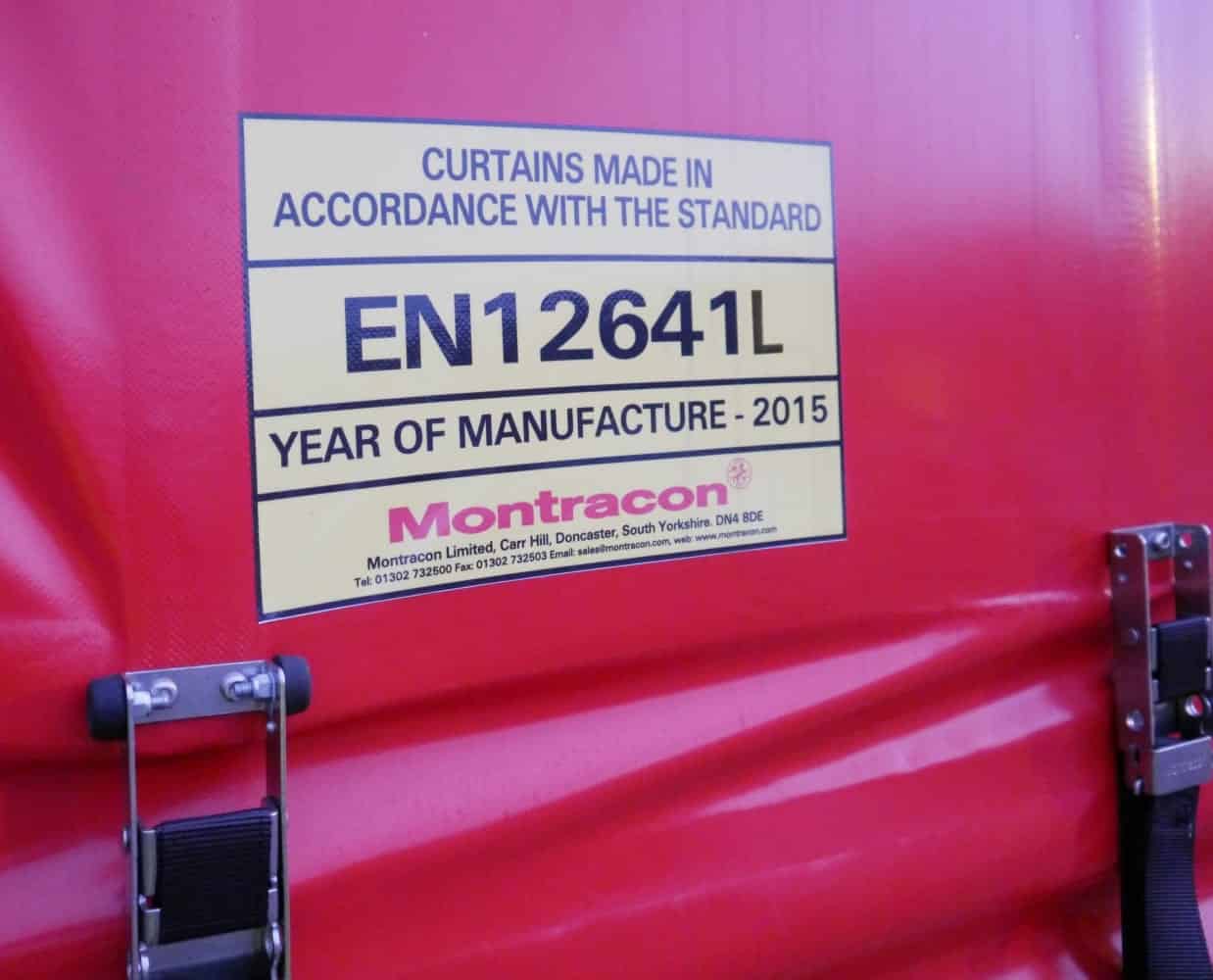 In effect, these are standard trailers which have been fitted with the curtains associated with XL trailers. These trailers typically do not have the reinforced roof, bulkhead and rear doors expected on a XL trailer. We are reliably informed that more often than not the roof of a trailer is likely to give way before the curtains (in test conditions), and as such, the additional materials in an XL trailer are key to its success.

In addition to full bodied vehicles, EN12642-XL also applies to the headboard on flat/platform products. An option we can offer. 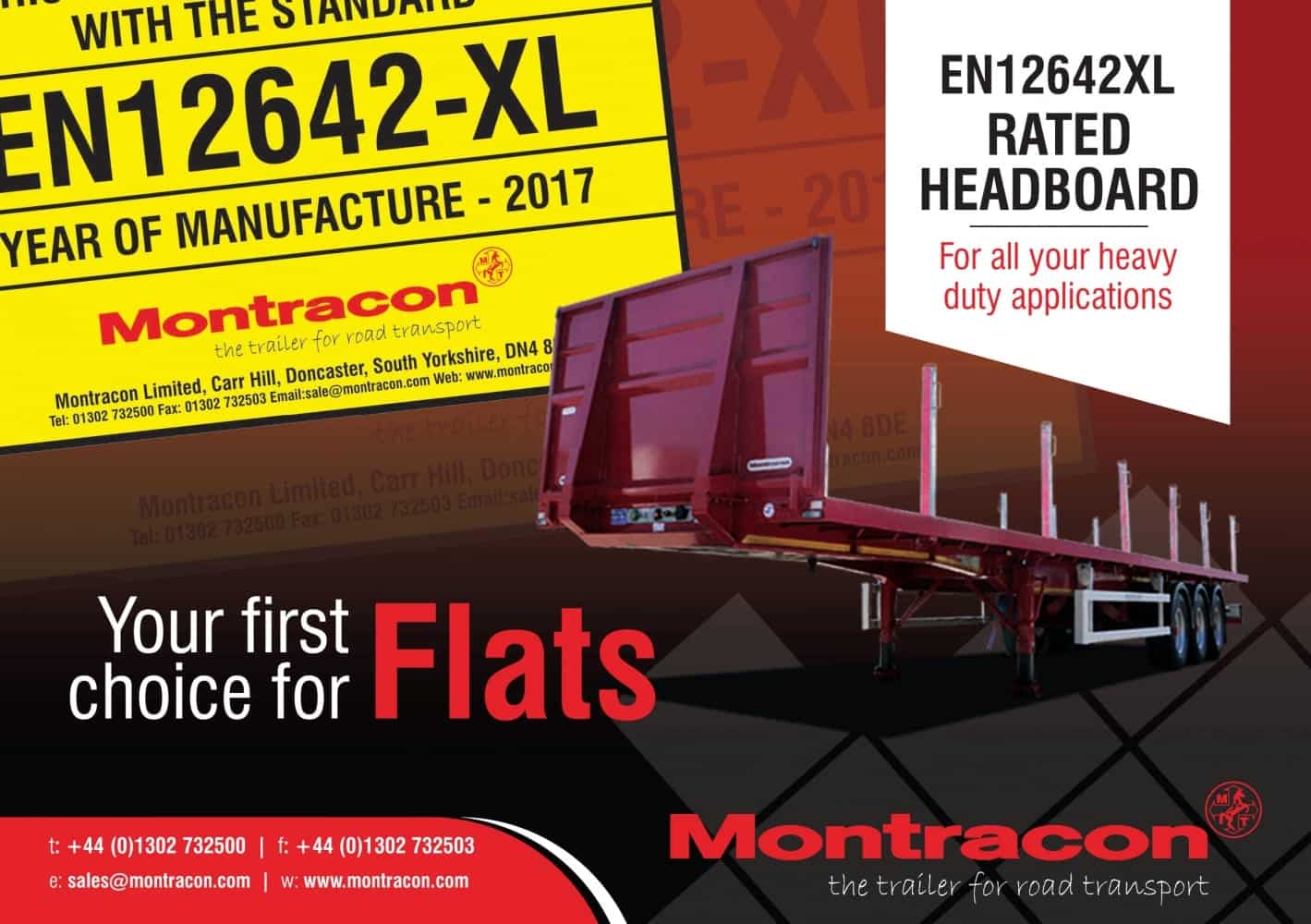 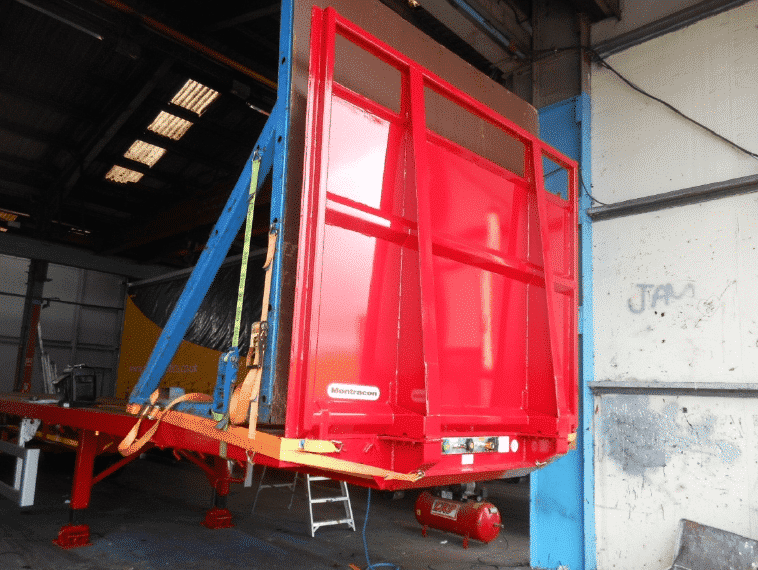 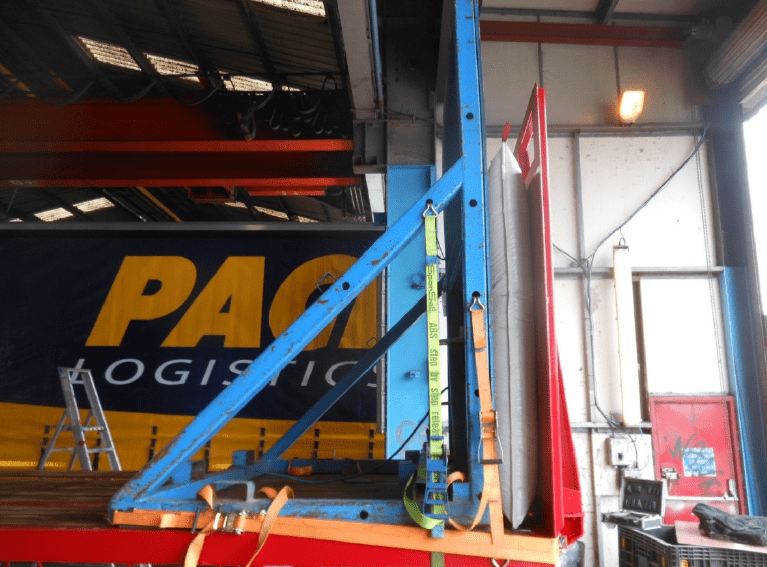 The structural strength and the form stability of the headboard is tested using direct stressing of the cargo bay edges by excerting test forces with a pneumatic test rig. The test must take place with the headboard in its intended operating condition and with all body/structural components in their operational position.

The use of a test rig allows all reactive forces to be applied directly into the trailer floor. The application of the testing forces allows the strength and rigidity of the entire body to be tested.

The standard headboard @ 1500mm high is rated at a 20000 Kg payload. Both TUV tested and certified.

If you would like anymore information about Montracon EN12642-XL products, feel free to contact us on 01302 732500 or email sale@montracon.com

Page load link
We use cookies on our website to give you the most relevant experience by remembering your preferences and repeat visits. By clicking “Accept All”, you consent to the use of ALL the cookies. However, you may visit "Cookie Settings" to provide a controlled consent.
Cookie SettingsAccept All
Manage consent

This website uses cookies to improve your experience while you navigate through the website. Out of these, the cookies that are categorized as necessary are stored on your browser as they are essential for the working of basic functionalities of the website. We also use third-party cookies that help us analyze and understand how you use this website. These cookies will be stored in your browser only with your consent. You also have the option to opt-out of these cookies. But opting out of some of these cookies may affect your browsing experience.
Necessary Always Enabled
Necessary cookies are absolutely essential for the website to function properly. These cookies ensure basic functionalities and security features of the website, anonymously.
Functional
Functional cookies help to perform certain functionalities like sharing the content of the website on social media platforms, collect feedbacks, and other third-party features.
Performance
Performance cookies are used to understand and analyze the key performance indexes of the website which helps in delivering a better user experience for the visitors.
Analytics
Analytical cookies are used to understand how visitors interact with the website. These cookies help provide information on metrics the number of visitors, bounce rate, traffic source, etc.
Advertisement
Advertisement cookies are used to provide visitors with relevant ads and marketing campaigns. These cookies track visitors across websites and collect information to provide customized ads.
Others
Other uncategorized cookies are those that are being analyzed and have not been classified into a category as yet.
SAVE & ACCEPT
Go to Top